Albania should be considered a potentially rich country in terms of human capital and natural resources. How can these be activated to sustainably boost locally added value for what Albania’s Prime Minister Edi Rama has termed Next Generation Albania?
In response to Rama’s call to designers worldwide to contribute to Next Generation Albania, George Brugmans (IABR), Freek Persyn and Johan Anrys (51N4E, Brussels) proposed Atelier Albania.
The Atelier was established in February 2014 and integrated into the Albanian Ministry of Urban Development’s National Planning Office (AKPT), directly advising the Albanian government. AKPT’s director, Adelina Greca, is the Atelier’s director; Brugmans and Persyn were engaged as special advisors.

Leapfrog
The challenges in Albania are immense when looked at from the perspective of having to catch up with the rest of Europe. On the other hand, all nations now face the challenge of how to successfully make the transition to the next economy, to a green economy in a resilient post-fossil future. Could Albania not skip the catching-up phase, and focus instead on how to leapfrog into the twenty-first century? To be able to do so, Albania must develop its own vision and strategy on the basis of the unique characteristics, cultural values, and scenic qualities of the country itself, and frame them in a global context.
Atelier Albania’s main ambition is therefore to design a sustainable economic development model for Next Generation Albania. Its first priority is to activate the potential of Albania’s territory by re-imagining it in terms of its natural ecology: a coherent ecosystem with a metabolism made up of material flows, such as water, food, and energy, the country’s main natural resources.
The main goal of the Atelier is to foster a culture of learning by doing, of national planning as a continuous work in progress, where planning becomes a strategic feedback loop that produces applicable plans and projects that in turn inform the process of planning, and so forth.

Three tracks
Now, almost two years after its inception, Atelier Albania has developed three main parallel tracks.
First, a series of international competitions has delivered pilot projects the most promising of which are now being nurtured towards implementation. These competitions scout the territory, find out the lay of the land and collect intelligence.
Secondly, a structural dialogue between different stakeholders and international experts has been stimulated that has led to the decision to reformat the National Planning Agency and to redefine its brief, which in fact should lead to Atelier Albania taking over most roles of the National Planning Agency.
Thirdly, the need for a coherent development frame, based on the ‘metabolism approach’ developed by IABR, has been advanced in order to give direction and focus to the immense challenge of spatial and urban development policies in Albania. This frame is needed to uncover, in an organic way, the leapfrog potential that the country has.

The project was put into operation by a coalition of Albanian, Dutch and Belgian partners: Atelier Albania, the Albanian Ministry of Urban Development and other ministries, the PBL Netherlands Environmental Assessment Agency, the TU Delft Chair of Landscape Architecture, .FABRIC, 51N4E and IABR.
Atelier masters were Brugmans and Persyn. The project managers were Marieke Francke (iabr/UP), Sotiria Kornaropoulu (51N4E) and Joni Baboçi (AKPT).
The Dutch Embassy in Tirana and RVO NL/Ministry of Economic Affairs of the Netherlands generously supported the project.

The results of the project are published as The Metabolism of Albania: Activating the Potential of the Albanian Territory (iabr/UP, 2016). A selection of the results is the basis for the presentation of Atelier Albania in IABR–2016–THE NEXT ECONOMY. More information here. 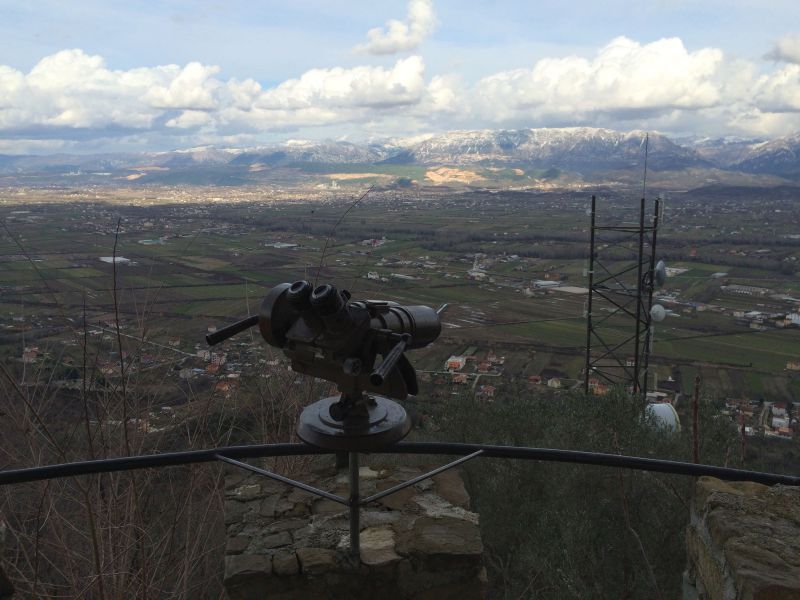 Atelier Albania’s main ambition is to design a coherent sustainable economic development model for Next Generation Albania. Its first priority therefore is to activate the potential of Albania’s territory by re-imagining it in terms of its natural ecology: a coherent ecosystem with a metabolism made up of material flows, such as water, food, and energy, the country’s main natural resources.

This need for a coherent development model became clear in a very early phase, when Atelier Albania was asked to advance guidelines for the development of the coast, primarily as a tourist destination, obviously a national top priority. We argued that, given the opportunity to leapfrog, such an effort would not just have to focus on the coast in terms of economic development but also on its footprint. We therefore postulated a sustainable development model. In order to be able to actually produce such a model, we needed to look not only at the coast itself but also at the hinterland, at Albania’s complete territory. The coast is not an isolated part of the territory; it is part and parcel of what we call ‘the metabolism of Albania.’ In other words, we suggested a holistic approach and maintained that before Atelier Albania could begin to suggest overall plans and grand projects, a thorough research of the metabolism of the country had to be done, as this would provide the frame necessary for Albania’s sustainable development.
The Metabolism of Albania
Understanding the metabolism of the complete territory of Albania is also meaningful in connection to the metabolism of the wider region, southeast Europe, and of the world at large. It allows for the timely recognition of leapfrog opportunities. Positioning Albania within regional and global situations and trends while looking through the frame that the metabolism approach provides, allows for a new approach to identifying comparative advantages in a global context.
Obviously, the metabolism approach has many implications for the way we plan, design and govern our future living environment. But in the case of Albania it soon became clear that it also provides us with a way to productively connect to the country’s past. In socialist times, large parts of the territory where managed as integral landscape systems. The metabolism approach not only gives us tools with which to utilize Albania’s natural resources and human capital, it also allows us to understand decaying territorial infrastructures in terms of their potential. It provides us with a coherent frame for the different potentialities and promises that the territory, once activated, offers.
To sum up, Atelier Albania has embraced the notion that if we consider the Albanian territory as a natural ecology, a coherent ecosystem, and analyze its structure and performance to understand and be able to use the process of its material flows, we can make the territory more resilient and thus act to contribute to a more sustainably productive Next Generation Albania. 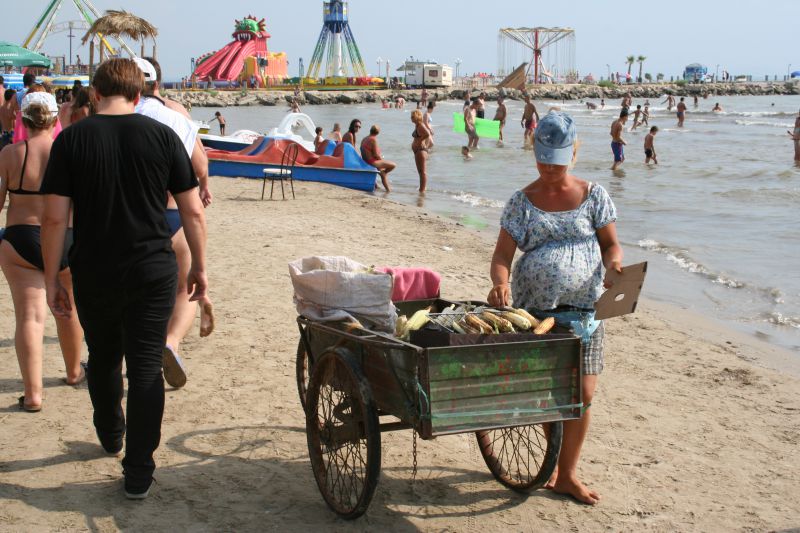 Method
iabr/UP and 51N4E, together with the IABR and its research partners of Atelier Rotterdam, the Chair of Landscape Architecture of Delft University of Technology, the Netherlands Environmental Assessment Agency, and the design office .Fabric, have brought their knowledge and experience to the Albanian territory.
Collaborating closely with the Albanian partners in a series of five intensive workshops fed by data research and analysis, field trips, mapping, presentations and lectures, and research by design in Albania and in the Netherlands, we focused mainly on the material flows of food, water, and energy. The flows have been the raw material for a debate that, though it touched upon a much wider range of subjects, time and again restarted the discussion of the way the different dimensions of our everyday surroundings mutually influence and potentially strengthen rather than weaken each other.

The research by design was set up concurrently with the data research. Albania was compared with other countries and regional conditions to map challenges, opportunities, and strategies that way and in a wider context as well. On a much smaller scale, on the other hand, possible testing locations were explored by means of concrete interventions.
In the last two workshops the results of data analysis, info graphics, and mapping were linked to the proposals that ensued from the research by design. This allowed us to identify the areas where multiple interests meet: by sharing considerations, bottlenecks, and potentials, a first step was made in reframing the problems to identify the critical projects that can strategically kick-start overlapping development opportunities.

We subsequently presented the synthesis of all output to the Prime Minister and members of the cabinet during the final workshop in Albania, with the main aim to once more coordinate the recommendations and project proposals resulting from the research with the strategic priorities of the Albanian government.

Next steps
The results of The Metabolism of Albania are now to be applied to the Albanian territory. They should be further developed as regional development projects that will produce applicable results and trigger concrete investments on site. These projects will be effective both on the local and on the regional scale, and thus deliver important input for the ongoing and permanent evolution of the national plan. Of course, they can only be effective when an intensive process of capacity building on all administrative levels is part and parcel of the project itself. Work on the regional scale and the making of the National Plan by the Ministry of Urban Development will have to be coordinated in such a way that they have meaningful impact on each other. This is a reciprocal process; both are a work in progress. The projects on the regional level will connect the local to the national, and hence will drive an incremental learning by doing process that sees national planning as cumulative and necessarily adaptive. 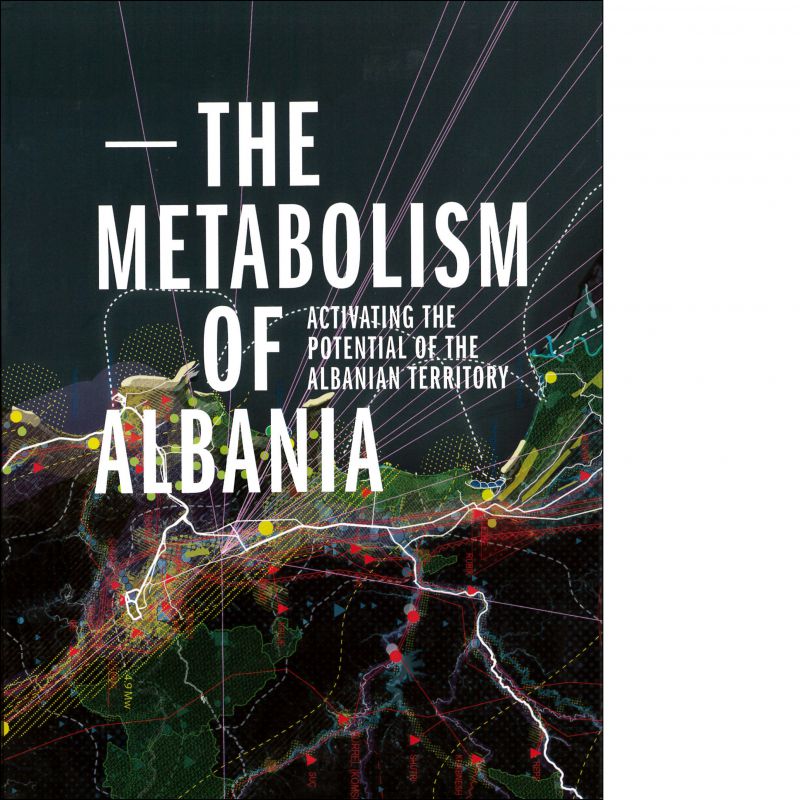 The book The Metabolism of Albania clusters the results of an intensive trajectory of data research and analysis, field trips, mapping, workshops, presentations and lectures, and research by design, supervised by iabr/UP and 51N4E and with essential input from the Chair of Landscape Architecture of Delft University of Technology, the PBL Netherlands Environmental Assessment Agency, and the design office .FABRIC, in close collaboration with the National Territorial Planning Agency of Albania (AKPT) and many other Albanian partners.
For more information, click here

€ 12,50 (plus handling and postage)
directly available from IABR 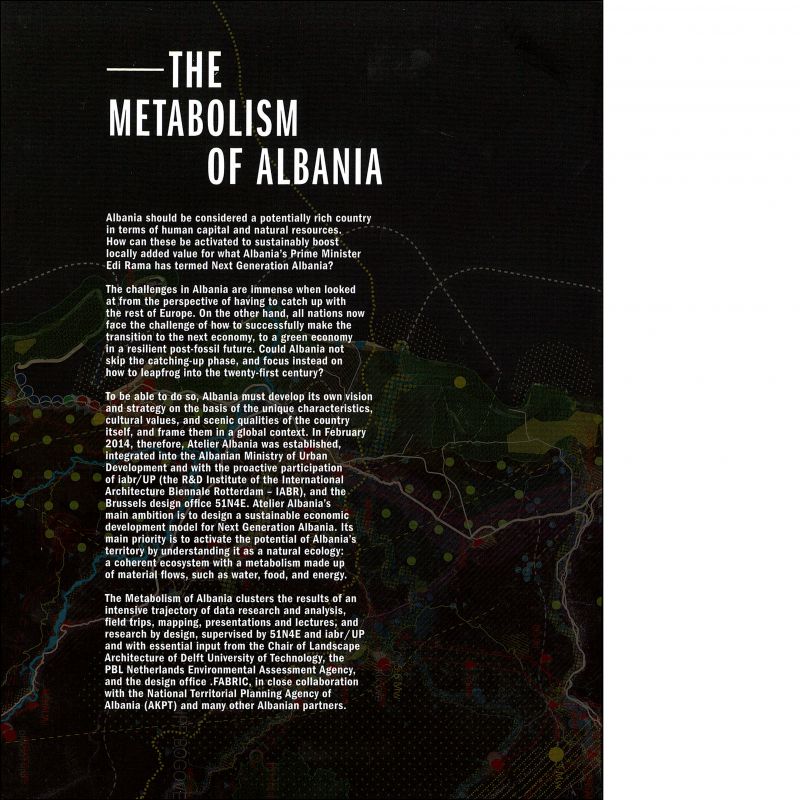