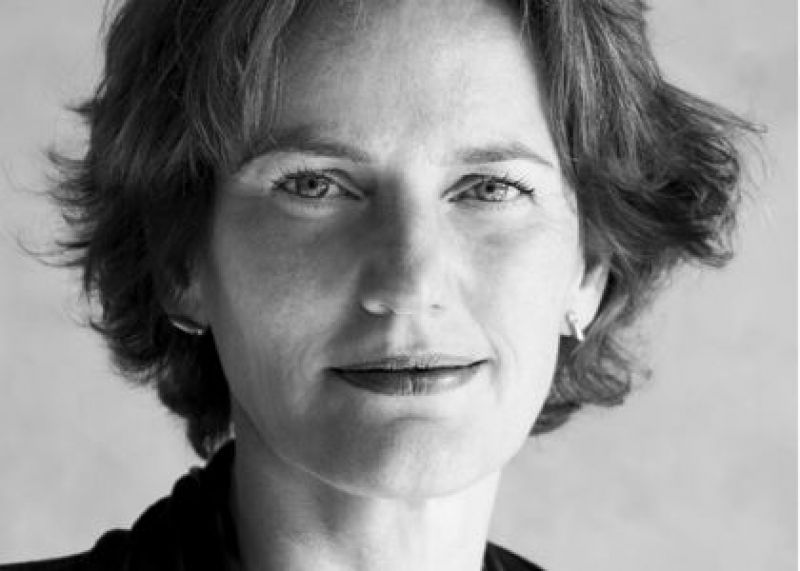 Francine Houben (1955) is one of the founders and the creative director of Mecanoo architects in Delft, Holland. She began formulating the three fundamentals of her lifelong architectural vision, Composition, Contrast and Complexity, while studying at the Delft University of Technology where she graduated as architect with cum laude honors in 1984.
Always looking for inspiration and the secret of a specific location, Houben bases her work on both analyses and intuition. She enjoys interweaving social, technical, playful and humane aspects together in order to form a unique solution to each situation. Houben combines the disciplines of architecture, urban planning and landscape architecture in an untraditional way; with sensitivity for light and beauty. Her use of material is expressive. She is known as one of the most prolific architects in Europe today. Her wide-ranging portfolio comprises an intimate chapel built on the foundations of a former 19th century chapel in Rotterdam (2001) to Europe’s largest library in Birmingham (2013).

Francine Houben’s contribution to the profession of architecture is widely recognized. She was granted lifelong membership to the Akademie der Künste, Berlin in 2010. In 2008, she received the Veuve Clicquot Business Woman of the Year Award. Fellowships to the American Institute of Architects, the Royal Architectural Institute of Canada, and the Royal Institute of British Architects were granted to her in previous years. The past three decades have seen her cumulative effect on the profession of architecture. Francine lectures all over the world and takes part as a jury member in prestigious competitions. Her commitment to research and education is evidenced in her instatement as professor in Architecture, Chair of Aesthetics of Mobility at the Delft University of Technology (2000), her professorship at the Universitá della Svizzera Italiania, Accademia di architettura, Switzerland (2000) and her appointment as visiting professor at Harvard (2007).
Francine Houben lives in Rotterdam, a modern city where the skyline is dotted with buildings designed by world renowned architects including Houben’s own award winning Montevideo Skyscraper (2005). It was here that she directed and curated the first International Architecture Biennale Rotterdam (2003), with the theme Mobility, a Room with a View. She has realized numerous signature projects throughout the Netherlands and Europe including Philips Business Innovation Centre, FiftyTwoDegrees in Nijmegen, (2005-2006), La Llotja Theatre and Conference Centre in Lleida, Spain (2009) and the Delft University of Technology Library (1999). Currently, she is expanding her architectural vision to other continents with the design of Taiwan’s largest theatre complex, The Wei-Wu-Ying Center for the Arts in Kaohsiung (2014), Dudley Municipal Center in Boston (USA) and Shenzhen Cultural Center (China). In 2011 the book Dutch Mountains was released, a chronicle of Francine Houben and eight special projects in five different countries.

Francine Houben: Learning Environments
Learning environments play an increasingly important role in the urban economy; education and the city need each other. In the past, universities and colleges were often approached as isolated building projects. Today, we talk about ‘innovation environments’ that raise the spatiostrategic question of how education, commercial activity, and other public functions can be knit together. Ideally, this is done in a way that creates a sustainable vital public domain, where creativity thrives and is permanently appreciated. What are the new learning environments that cleverly combine knowledge and testing platforms, startups, and free zones? How can educational institutions transform into dynamic anchor points of the urban economy? Will they be able to train people for jobs that haven’t been created yet, rather than for jobs that no longer exist?

Based on her award winning designs for the Library of Birmingham, the Delft University of Technology Library, and Amsterdam University College, Francine Houben will discuss her views on education, the city and the Next Economy.

Respondent for the lecture is Jet Bussemaker, the Dutch Minister of Education, Culture and Science (subject to change)

Francine Houben is the founding partner and creative director of Mecanoo architecten, based in Delft, The Netherlands. Her work has received international critical acclaim, each project illustrating the three fundamental elements of her architectural vision: people, place, purpose. She currently leads the renovation of the Midtown Campus of the New York Public Library and the revitalization of the Martin Luther King Jr. Memorial Library in Washington DC.
In November 2015 Queen Máxima of the Netherlands presented the Prins Bernhard Cultuurfonds Prize to Francine Houben for her oeuvre.
Francine Houben was curator for the first edition of the IABR, Mobility: A Room with a View, in 2003.


FRIDAY 13 MAY
Time: 5.30 - 7 p.m.
Location: Fenixloods II, Paul Nijghkade 19, Rotterdam
Language: English
Admission fee: none, provided you can produce a valid exhibition ticket.
A reservation in advance is highly recommended and can be made here.

Provocative Friday afternoon lectures by famous thinkers Every Friday afternoon, a Next Talk will take place in the auditorium of THE NEXT ECONOMY-exhibition. Radical and provocative ideas for the future of the city are given a platform. International speakers stimulate and intensify the debate about the Next Economy.

Opening
7 May 2003, by Beatrix, Queen of The Netherlands