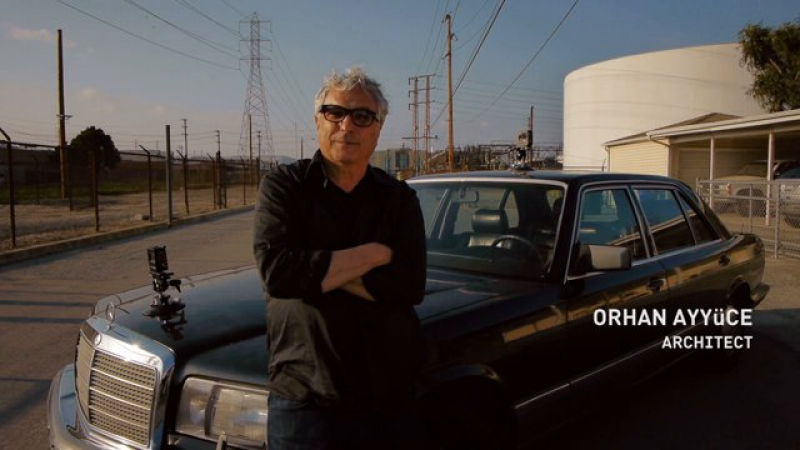 "This city is a car city. Los Angeles is cars. From the urbanist's point of view, in order to understand the city, you have to drive", says the architect Orhan Ayyüce in the film The Vernon City Project.

Forty years after "Reyner Banham loves Los Angeles" another architect with the gaze of the foreigner takes us on a ride through the City of Angels, or as the Turkish architect Orhan Ayyüce likes to refer to it: "La Citta Capitalista".
Ayyüce takes us to Vernon City, just south of down town LA.
Vernon is an atypical Los Angeles town, perhaps the most atypical town in the entire USA. It has only 100 inhabitants and most of them work for the town council. The majority of buildings in Vernon are big boxes: commercial or industrial buildings. Every day over 50,000 people come to Vernon to work – it’s one of LA’s most important food distribution centers and thus a key logistics hub in the metropolitan region.
An ‘exclusive industrial town,’ Vernon borders on the cosmopolitan downtown of Los Angeles. What opportunities are there in this unique city on the banks of the Los Angeles River? Are alternative forms of housing, agriculture, and nature imaginable in a town that relies solely on industry and transport?

The Vernon City Project, submitted by the LA Forum for Architecture and Urban Design and run by Orhan Ayyüce, was selected for THE URBAN METABOLISM– section of the main exhibition of IABR–2014–URBAN BY NATURE–