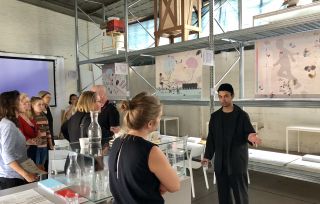 Harvest
The Harvesting Day delves into the phenomena of locality and circularity, related to (food)production. It questions what we eat, where it was harvested, and how this might or might not affect our health. Can a school not only teach its pupils about maths and geography, but also about what it means to live healthily?

Guest lecturer Jos Klarenbeek has analyzed the dairy production chain from cow to consumer. Within the current mass-production systems, 1020 litres of fresh water is needed to produce one kg of milk. Questioning this and the mass-production of dairy in general, Jos Klarenbeek designed a Cowtarium: an installation built around a single cow which represents a down-sized production cycle within which all the steps necessary for the production of milk take place at the same spot.

The second guest lecturer, Aliki van der Kruijs, wondered if it is possible to wear the weather? She therefore developed an entirely new technique: pluviagraphy. Applied to textiles and ceramics, raindrops are captured in ink and glaze, creating site- and time-specific textiles and ceramics.

Invited artist Teresa van Dongen aims to bridge nature, science and design in her work. During the “Harvesting Day”, she will show two works, being Lumi and Lumist. Currently, Teresa is working on commissioned and self-initiated projects out of her Amsterdam-based design studio.

location: Studio Makkink & Bey, Marconistraat 85, Rotterdam
date: June 15
the exhibition is open from 2 until 7 pm, the lectures and discussions are scheduled between 4 and 6 pm
language: English