The Next Story #10: Janneke Eikelenboom

Verhalenhuis Belvédère
On 26 June, Janneke Eikelenboom will talk about the magic of Katendrecht. Three years ago, she wanted to move from a Westland village to one of the Netherlands’ major cities. She looked at properties in Utrecht and Amsterdam, but after her first visit to Katendrecht she knew: this was the place for her.
Janneke: ‘Katendrecht is where the world is and where I can be myself.’ She is very happy with her new home in the middle of the neighborhood. ‘Across the street are the houses of people who have been living in "de Kaap” for a very long time. When the weather is good, they bring out the baby pools and the barbecues: this neighborhood is alive.’ Janneke is a volunteer at the Verhalenhuis. Her motto: ‘You’ve got to give to get.’ 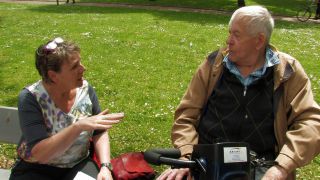 still from film by Rick Messemaker

When it comes to the future, Janneke is quite clear: ‘Newcomers and long-time Katendrecht residents need to connect more. Now, there is sometimes mistrust, which is both understandable and unfortunate.’
In everyday encounters on the streets of her neighborhood, she deliberately engages with many different people. She is curious and finds that, generally speaking, people like it if you take time to talk to them. In the last Next Story, Janneke will tell us all about these and similar subjects. She will also present a film by Rick Messemaker, introducing one of the older residents and a young entrepreneur, two of the people she met in the streets of Katendrecht.

Curious? Come join us at the Verhalenhuis on 26 June.

A the request of IABR–2016 the Verhalenhuis Belvédère developed The Next Story. In ten afternoon sessions during the Biennale, remarkable stories of inhabitants of Katendrecht will be shared with the audience. What is their Next Story? Based on their past and present situation, what future would they want, and how is their narrative related to Katendrecht? Together, these personal anecdotes will show how active individuals can influence the development of their neighborhood, and even their city.