IABR–2014–URBAN BY NATURE– promotes a new perspective on the city: why not analyze and understand it as an organism with its own metabolism constituted by its different material flows, such as cargo, people, data, energy, water and waste?

EVERYTHING FLOWS
The potential of this new approach to making city was the main focus of the public event on Wednesday November 6th. Dirk Sijmons, curator of the IABR–2014–URBAN BY NATURE–, introduced his fascination for the analysis of the metabolism of the city as a tool for spatial design and planning. Sijmons holds that city and nature are one and the same system. The city has become our natural habitat and like the human body, it has its own metabolism. It is on the scale of the metropolis, of the big urban landscape, in which we in fact now live, that this system can best be understood and that possible solutions for sustainable development may be found. The question remains how architects, landscape architects and urban planners can use the analysis of such an urban metabolism in their day-to-day practice. Sijmons identifies at least three scales on which they can. One is the particular infrastructure of each material flow, which is a design task in itself. Secondly, either shortening or closing the cycles of the flows can improve the environmental performance of a city. And finally, when the material flow is taken as a starting point, the metabolism itself can become a formative tool for urban development.

Commissioned by the IABR and the Municipality of Rotterdam, the design offices JCFO (New York) and .FABRICations (Amsterdam) developa vision and strategy for a sustainable Rotterdam based on the analysis of the metabolism of the city. In the context of IABR–Projectatelier Rotterdam they analyse the material flows in the city and the wider delta in which it is located, and they will propose concrete pilot projects for interventions on the larger and smaller scale level. 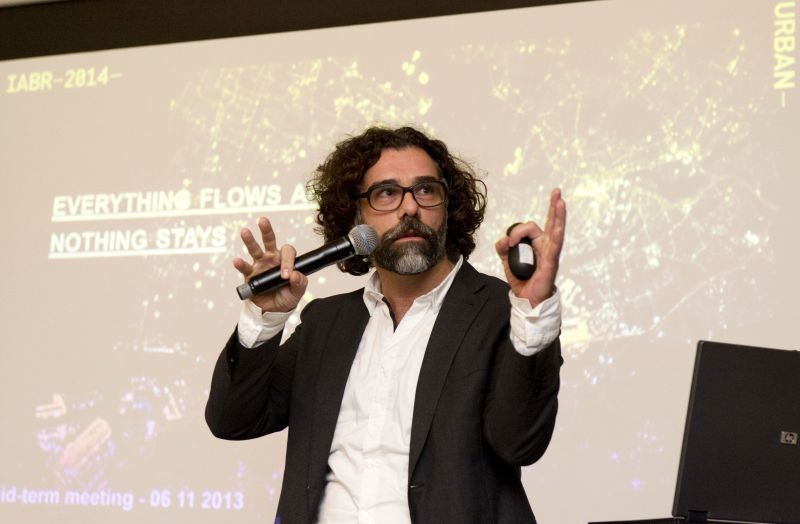 At the Urban Meeting Richard Kennedy (JCFO) and Eric Frijters (.FABRIC) presented the first results of their specific research. Already, an impressive series of maps has been created based on an in-depth analysis of all collected data (provided by the Netherlands Environmental Assessment Agency, the municipal services of Rotterdam, the Rotterdam Port Authority and other stakeholders) in which Rotterdam is taken as the central node in a large delta. These maps are the point of departure for the ensuing design work when the offices will further investigate how smarter design of the material flows can benefit Rotterdam.
By combining the analysis of the (local) challenges of Rotterdam with international trends, the possibilities for new perspectives surface.

During the Q&A Isabelle Vries, strategist at the Port of Rotterdam, agreed that when working on individual material flows such as a Rotterdam heat-network, for which JCFO and .Fabric presented a first outline, design is important, but always in conjunction with other, technical expertise.
This is not yet the standard way of thinking though. Dirk Sijmons mentioned that: "All my life as a designer I've been told that I shouldn’t be working on water infrastructure, forests or greenhouses." But of course he, and other designers do. And this reflects the core argument of the IABR–2014–, that design by research, by exploring what it is that might and can be done, provides insight into how the analysis of all the material flows, individually and in coherence, can be put to work to make more resilient and livable cities.

IABR Project Atelier Rotterdam is a collaboration of the IABR and the Municipality of Rotterdam. Commissioned by the national government, the IABR Project Ateliers use design driven research to shed a new light on local and regional spatial challenges. The design research of Project Atelier Rotterdam is executed by James Corner Field Operations (New York) and. FABRICations (Amsterdam). The results are presented on the platform of the Biennale, which opens its doors on 29 May 2014, and the Municipality of Rotterdam will subsequently deploy them.