The Tromsø 'Ski Way', an augmented ecology
How local customs can set an example for future integration of urbanity and nature in order to contribute to sustainable urban development.

Acknowledging the Anthropocene urges us to question common urban concepts. How are we to integrate nature with our cities or vice versa? New and beneficial solutions for integrating urbanity with nature could be accomplished by seeking a symbiotic relationship between the two - transcending into what one might call an augmented ecology. The Ski Way in the Norwegian city of Tromsø may serve as an example of an augmented ecology. The city's unique relationship with nature facilitates sport as a means of transport. 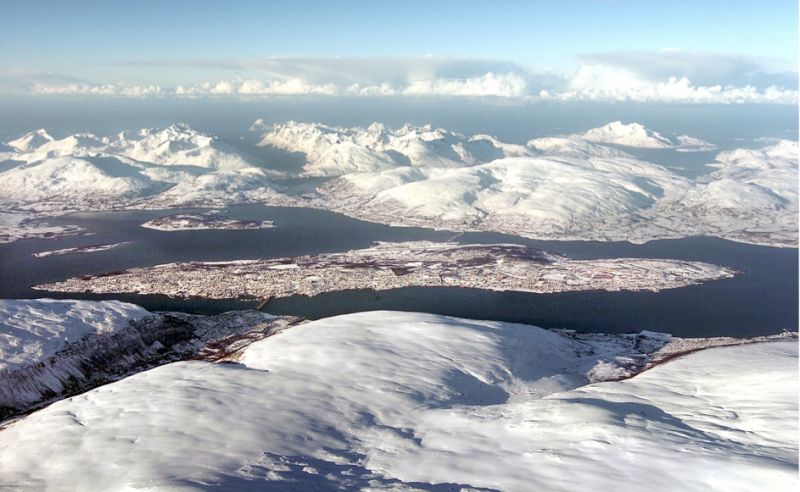 The Norwegian city of Tromsø is situated 350 kilometres north of The Arctic Circle. The winters are long and snowy, hence skiing has always been an important part of city life. In 1843, the world's first official skiing competition was held in Tromsø. Before cars and motorised snow plows, skiing was a practical transport mode, in and around town. Today, skiing is mainly recreational. However, the custom of commuting by ski has persisted, in fact the trend is even growing. A 'ski way', suitable for sport and transport, runs along the parklike area commonly referred to as 'Tromsømarka'.

The Marka
Several Norwegian cities lie adjacent to an unspoiled natural area, also called 'marka': a place to ski in winter and camp in summer. Oslo has Nordmarka, only 40 minutes by subway from the Central Station. Tromsø has Tromsømarka. While other Norwegian cities are surrounded by their marka, Tromsø's urban area surrounds its marka on all sides. This is due to the fact that Tromsø is situated on a ten kilometres long and three kilometres wide island. The city originally developed along the coast, thus leaving the centre of the island untouched. Stretching north-south, the 'ski way' runs in the undeveloped landscape, serving as a connecting field for the city. As such, on the island, the quickest way of commuting between east and west is often by ski or bicycle.

'Lysløypa'
'Lysløypa' translates to 'light trail' and refers to the streetlights on the ski way. These lights enable the use of the tracks at any time of the day or year. This is of particular significance in winter when the sun doesn't rise for two months and Tromsø only benefits from two or three hours of dusk during midday. In the 1960s, a wealthy industrialist financed the installation of the trail lights. Soon enough this trail became a natural asset of life in Tromsø. Today the ski way is administrated by the municipality. The frequentation of Tromsømarka has intensified with the growth of the city. In consequence, previously untouched areas have been urbanised with signage, road construction and resting areas. Additionally, daily maintenance of the trails is essential during winter

Trouble in Paradise
The trail contributes to decongesting the rush hour traffic. The effect on decrease in car usage is estimated to a 1.000 cars a day. The possibility of jogging or skiing to work also represents an obvious health benefit. The citizens of Tromsø are well aware of this fact. In early morning hours the ski ways are packed with people. It is during this rush traffic that the phenomenon of road rage finds it's Norwegian equivalent: 'ski rage'.
Many persons regard skiing in the trail as more than just commuting: it is above all clocking in a better time than yesterday. During winter, the trail is like a Winter Olympics track. Anyone or anything representing a potential obstacle must beware, be it slow skiers, pedestrians or dogs. Skiers are equipped with ski poles and some are even armed with a bad morning temper. Conflicts between user-groups are common in the trail. As a palliative measure, the city has recently added a lane designated for walking and bicycling.
Traffic congestions also occur regularly. In one particular location, the ski trail passes over a bridge which is also used by city buses. This road segment has concrete pavement, skiers must therefor take off their skis to stroll across the bridge. Hence, the buses are forced to wait, causing traffic jams. However, this is rather a testament to the ski way's popularity. It is this success that inspires politicians to keep developing the area in order to make it even more attractive. 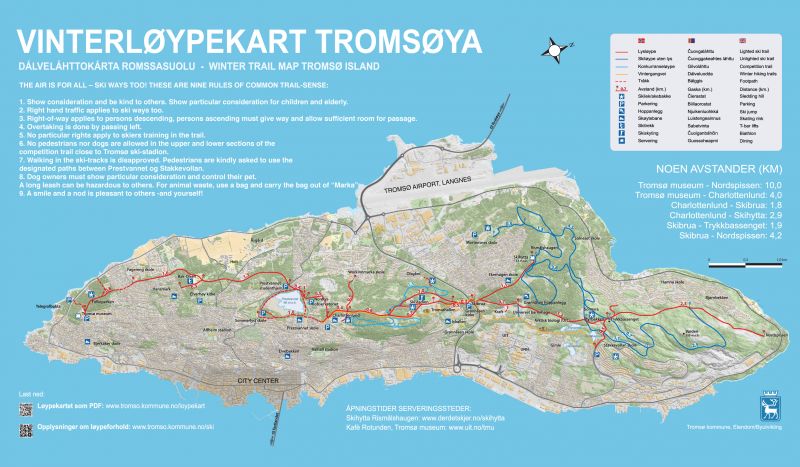 Augmented Ecology
Acknowledging the Anthropocene urges us to question common urban concepts. How are we to integrate nature with our cities or vice versa? Ecology is a term both used to describe the relationship between living organisms and their environment or the relationship between human groups and their environment. By separating the natural and human ecology - urbanism has evoked the need for “[…] a negotiation between 'human' and 'natural' spheres […]”1. In this scenario, one sphere is usually privileged over the other. New and beneficial solutions for integrating urbanity with nature could be accomplished by seeking a symbiotic relationship between the two - transcending into what one might call an augmented ecology.
The Norwegian government has declared that the High North will be it's “ […] most important strategic priority in the years a head”. In this context, Northern Norway might face a future entailing extensive exploitation of both renewable and nonrenewable resources. The indicators are apparent: Northern Norway was recently ranked on the 'most wanted' list of the mining industry3. Tromsø is among many 'urban satellites' scattered along the bountiful land- and seascape of the High North. Being the biggest city in Northern Norway, Tromsø cannot be unaffected by the regional development. The city might have to accommodate thousands of new inhabitants. This context challenges us to reinvent urban integration with the environment. The Ski Way in Tromsø may serve as an example of an augmented ecology, representing the city’s unique relationship with nature. Hopefully, as the city evolves it will keep its elements of augmented ecologies, and remain an urban fabric interwoven with nature.

This blog is written in relation to the final edition of Where is Tromsø going? a tripartite exhibition-series curated by the Unit for Urban Development in the Municipality of Tromsø. The project aims to explore possible urban futures – challenges, conflicts and opportunities – that could ensue from climate change and the avowed Norwegian High North policy, in the context of Tromsø.

Ron Røstad is a freelance writer and journalist who also blogs about local architecture and urbanism. Ron Røstad creates and tutors creative writing courses for children as well as adults. He is currently involved with the project 'Future Cities part three', working with the City of Tromsø. The main object of Future Cities is to initiate dialogue between the city and the public on sustainable urbanism.
ronrostad@gmail.com

Mads Nermo obtained a masters' degree in Architecture at the Norwegian University of Science and Technology (NTNU) in 2012. He works as an architect at Steinsvik Arkitektkontor in Tromsø and is teaching part-time at NTNU at the Faculty of Architecture, Centre for Real Estate Development and Facilities Management. He is also a board member of the northernmost branch of the national association of Norwegian Architects. In 2013, Mads contributed to an exhibition at the Oslo Architecture Triennial called 'Your Holmestrand' which discussed future scenarios of the city development of Holmestrand related to the establishment of the ICE connection to Oslo.
mads@steinsvikarkitekt.no

Tandi Reason Dahl is an architect and urban planner, currently curating the final edition of Where is Tromsø going? a tripartite exhibition-series exploring possible urban futures for the Municipality of Tromsø in Norway.
tandi.reason.dahl@tromso.kommune.no